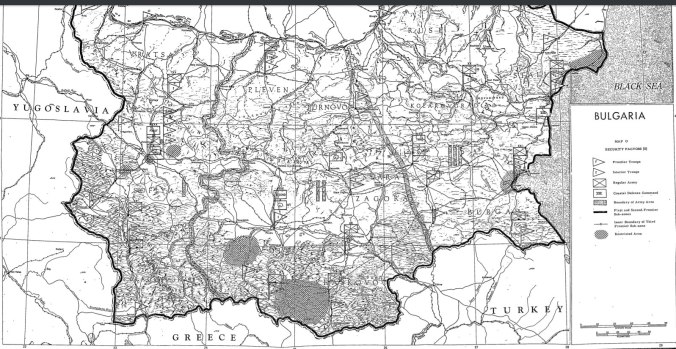 The village of Srem is less than 15 Km (as the crow-flies) from the Turkish border, which, during the Communist era, placed the village firmly within the third frontier zone.

According to a fascinating online booklet- 1957 partly declassified CIA handbook- titled, ‘Resistance Factors and Special Forces Areas- Bulgaria (O) marked ‘SECRET,’ and released in 2013, life within the frontier zones was highly regulated and only authorised personnel could move, and even then, only within approved areas.

“The first sub-zone is the border line itself, where there is a forbidden area of 100 to 500 metres which only frontier troops and authorised persons may enter. Signs with the inscription, “Death Zone” are posted and trespassers may be fired upon without warning.”

“In other sectors however, the rugged terrain defeats the best efforts of the frontier troops to maintain close control over the first sub-zone and Bulgarian defectors have been able to cross the border with relative ease.”

“The second sub-zone extends 2Km into Bulgaria from the inside boundary of the first sub-zone. Persons living in this second subzone have a special stamp affixed to their passport which gives them the right to move freely into the interior of the country and back again. They may not move laterally within the 2km beyond the district which they reside without special permission from the authorities.”

“Persons not resident in the second sub-zone may enter it only if they receive special written permission.”

“The third frontier sub-zone extends to the inner edge of the second sub-zone to varying distances inland… it extends considerably along the Turkish, Greek and Yugoslav borders.”

“Persons living within the third sub-zone have a stamp indicating such residence affixed to their passports. They may move freely between their sub-zone and the interior of the country, but are not allowed to enter the second sub-zone without proper authorization.”

“Internal movement in the third sub-zone beyond the boundaries of the ‘Obshtina’ also requires a special permit. Persons from the interior of Bulgaria may not enter the third sub-zone unless they have the appropriate documents authorising such entry.”

“Security regulations within the frontier sub-zone, as well as, between the frontier and the rest of the country are maintained by a series of check-points and roving patrols.”

“Procedures in individual localities are apt to be informal and cursory, only because the frontier troops and civilians know each other by sight.”

“While the experience of several thousand Bulgarian escapees into Yugoslavia, Greece and Turkey, indicate that undetected passage by unauthorised persons through the frontier is relatively facile, the elaborate security precautions taken by the regime make it inadvisable for special warfare to consider the frontier zone as a proper area for extended operations or refuge.”

Want to experience relics from the Frontier sub-zones one/two? The near deserted village of Matochina (only 1-2 Km from the Turkish border), is still home to decaying look-out towers, vast barbed fencing lines and various ominous warnings.